✯✯ WE OFFER FREE SHIPPING ANYWHERE IN THE USA ✯✯

FEW SHOES ARE beloved by the professionally fashionable and Republican politicians. The cowboy boot, however, sits comfortably in both worlds: If you were to make a Venn diagram of the wardrobes of Kate Moss and Ted Cruz, this is where they would intersect. Often in vogue but never really in vogue, the cowboy boot is a fashion paradox. This season, it’s having one of its intermittent moments in the spotlight.

Our tale picks up last fall, when designers on both sides of the Atlantic evinced a fascination with Americana, particularly of the Western variety. Because accessories are usually the easiest way—i.e. the cheapest way, relatively speaking—to buy into a trend, this piqued an interest in cowboy boots. Nurtured by photos of influencers like Kendall Jenner and the success of the HBO series “Westworld,” this fascination is now hitting critical mass, with offerings from Calvin Klein, Givenchy, Golden Goose Deluxe Brand and, of course, traditional makers like Justin Boots and Frye (whose marketing slogan for the season is “The Original, The Authentic, The Only”). 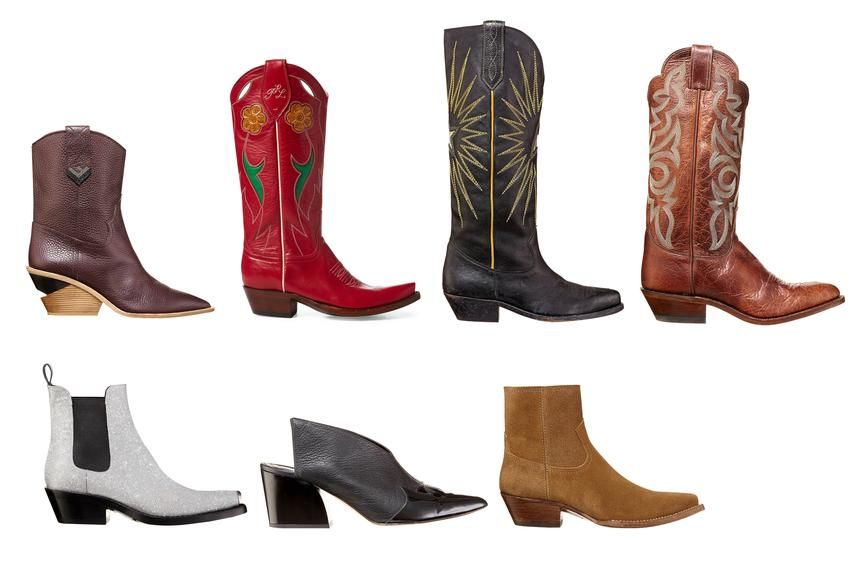 The cowboy boot is defined by a high, unlaced shaft, often intricately stitched; a smooth leather sole; and a high Cuban heel (the roper boot, a 20th-century innovation, has a lower shaft and heel and was developed for competitive calf roping, which requires riders to dismount quickly). Cowboy-boot lore holds that all these elements function practically: An unlaced shaft, said Rodney Ammons, a product developer at Justin, ensured that if a rider fell off his horse, “his body weight would pull his foot out of the boot.” The stitching stiffened the shaft, while the smooth sole and high heel let the foot slide easily into the stirrup and remain there.

But given the boot’s highly decorative nature, it seems unlikely that its design is strictly utilitarian. I suspect this just-the-facts-ma’am narrative developed because American men are traditionally loathe to admit they’re interested in style and cowboy boots were traditionally masculine. But if, for example, the stitching on the shaft were purely functional, it could run straight up and down. Instead, it adopts baroque patterns borrowed from the vaquero tradition. And that high heel? When it emerged, in the late 19th century, the tiny foot was the fashionable ideal for both sexes. “Cowboys were dandies,” said Wendy Lane Henry of Back at the Ranch, a cowboy-boot brand that specializes in exotic skins. “When they came into town, they dressed up. The underslung high heel made the foot look smaller and left a smaller footprint.”

Cowboy boots made the segue to fashion via the Hollywood Western, which introduced them to swaths of the cinema-going public. Thanks to screen cowboys like Tom Mix, the genre’s definitive star in the early 20th century, who dressed the part with panache, boots became more colorful and exaggerated—and the very pointed toe, which lacks any practical purpose whatsoever, emerged. In the 1930s, when dude ranches were fashionable, vacationing Easterners bought cowboy regalia such as jeans and boots and took it back home.

‘The cowboy boot is a surprisingly sexy shoe that encourages a strut.’

But the cowboy boot’s biggest fashion moment came in the early 1980s, when Ralph Lauren’s vision of the American West was ascendant and Mr. Lauren, then in his 40s, was viewed as a fresh, exciting talent. His success coincided with a wider cultural fascination with cowboys—Kenny Rogers was a music star, “Urban Cowboy” was a hit film, and President Ronald Reagan, who had appeared in Westerns such as “Cattle Queen of Montana,” wore cowboy boots for photo ops.

Since then, the cowboy boot has periodically emerged as a fashion statement (remember Madonna’s “Don’t Tell Me” video in 2000?) while becoming a staple for a surprising number and variety of designers. French clothing brand A.P.C. used the boots to signal nonchalant cool in the early 2000s, a tactic subsequently adopted by Isabel Marant and former Saint Laurent creative director Hedi Slimane, who designed a clean, simple cowboy boot for the brand for several seasons. LD Tuttle designer Tiffany Tuttle, a former ballerina , gives her cowboy boots a dark Goth spin, while Ann Mashburn goes for a mod neatness.

Ms. Mashburn, a retailer and designer based in Atlanta, was adamant about stocking a cowboy boot when she opened her first store in 2010. “It’s a big part of my personal style,” she said. “I was a fashion editor, so I needed practical clothes. But I also had this romantic view of fashion, of who am I going to be today?”

When pressed, cowboy boot wearers tend to talk about practicality—that word again. Don’t be fooled; as Ms. Mashburn’s comment suggests, there’s more going on here. Lots of shoes are practical, but only this one was worn by the cowboy: an American folk hero, a knight-errant figure with world-wide appeal. To walk in his boots is to take on some of his maverick glamour and disdain for authority. The cowboy boot is also a surprisingly sexy shoe that encourages a strut. As James Leo Herlihy, author of “Midnight Cowboy,” wrote, they make the wearer feel “strong…exultant.”

It makes you wonder why they’re ever out of style, doesn’t it?